One of the stops we made in Okazaki was to the Kakukyu miso factory. 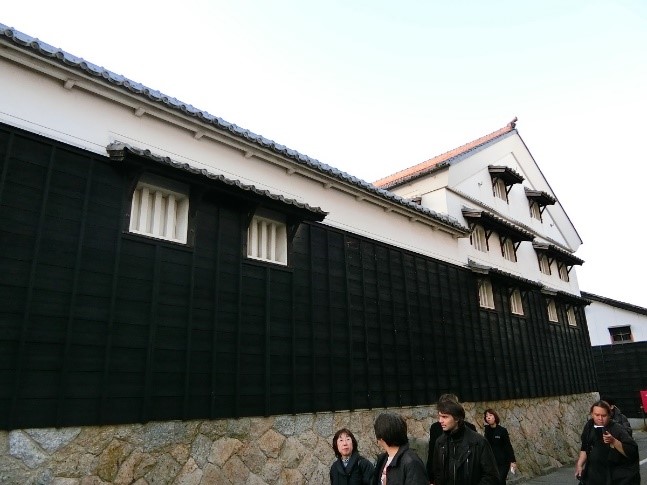 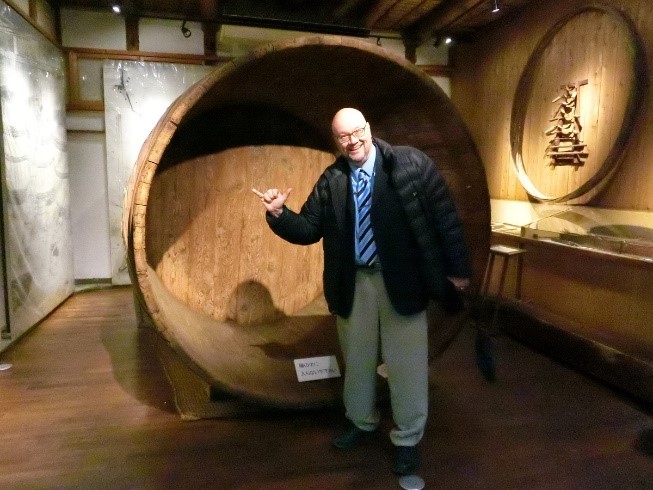 You are probably used to miso being translated as “soy bean paste.” However, most of the brands you see arrayed in stores should actually be called “soy bean and rice paste.” It is fairly difficult to find miso made entirely from soy beans. 100% soy bean based miso is differentiated in Japan by being called “mame-miso.” Okazaki boasts a particular type of mame-miso “Haccho-miso” which is known throughout Japan.
Now, perhaps you are wondering why a tour put together to study Lord Ieyasu would include a stop at a miso factory. While indeed a vital part of the Okazaki economy, a mame-miso producing town in one of the best assets a Sengoku-era warlord could hope to possess, both for waging war and establishing a solid bloodline.
First, let’s look at the warfighting benefits of mame-miso. The best combat rations at the time were mame-miso coated riceballs. They were portable, easily made by untrained personnel such as farmers who happened to live along the route one’s troops were advancing on, and had many nutritional benefits ideal for troops engaging in combat. The rice used at the time was barley rice. Barley rice provides almost 50 times as much dietary fiber as white rice, and almost twice as many carbohydrates. Barley rice required a lot of chewing, about 30 chews per bite, before the rice could be swallowed and this chewing helps stimulate the brain. Barley, along with miso, contains vitamin B1 which is essential for converting carbohydrates to energy. Mame-miso also was a valuable source of muscle-making protein which did not have the complicated logistics necessary to utilize animal based protein. Mame-miso also has a very long shelf life with simple storage requirements. It didn’t require feeding or refrigeration (not that refrigerators were widely available during the Sengoku era), just stuffed into a cask and left until called for. It was a source of lecithin, which converts to acetycoholine, which is required for adequate nerve function as well as improving memory storage and retrieval. Finally, mame-miso has a high salt content, which helped replace electrolytes lost through sweat.
In other words, troops fed with mame-miso riceballs were more mobile, stronger, smarter, and had higher endurance than troops fed other rations.
Perhaps the most famous episode involving mame-miso riceballs for combat rations was Lord Toyotomi Hideyoshi’s rapid re-deployment of forces (52 kilometers in five hours) to defeat the forces of Lord Shibata Katsuie at the Battle of Shizugatake. General Ishida Mitsunari, in charge of logistics for Lord Hideyoshi, had farmers along the route prepare and dispense mame-miso riceballs and water to the advancing troops, similar to water stations at current day marathon events. And if Lord Hideyoshi knew about the benefits of mame-miso riceballs, one can safely assume Lord Tokugawa did as well. Both served Lord Oda Nobunaga as senior generals and Lord Ieyasu ended up serving Lord Hideyoshi once Hideyoshi established himself as Nobunaga’s rightful successor.
Next, why mame-miso is vital for a feudal era warlord whom desires to establish a firm bloodline. Mae-miso contains a high amount of arginine, which is said to help increase sperm count and mobility. Lord Tokugawa Ieyasu was an enthusiastic consumer of mame-miso, had 17 wives, and fathered 16 children. Lord Ieyasu took his final wife when he was 68 years old, and fathered his last child when he was 66 years old, which would be equivalent to about 75 given today’s health standards. So, does mame-miso have an effect on male fertility? You be the judge.
Once the Tokugawa Shogunate was founded, Lord Ieyasu ensured Okazaki remained secure by placing it in the hands of his most loyal retainers, the Honda clan. Lord Ieyasu knew the value of mama-miso, one presumes. 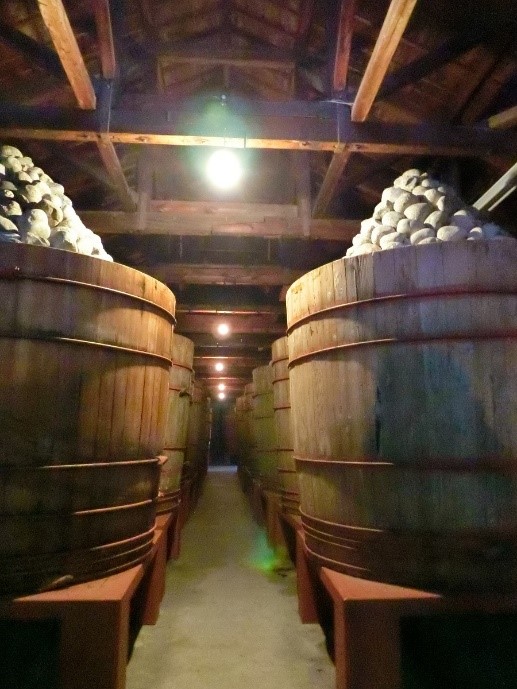 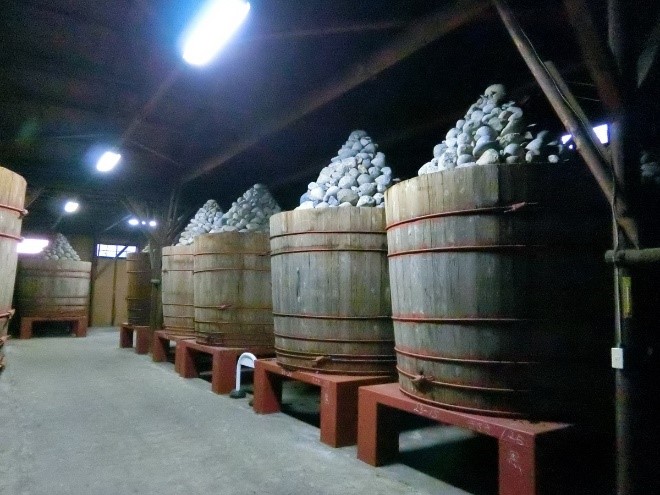 Anyway, back to the present. By the time we arrived at the Kakukyu miso factory, the light was starting to fade. A very dainty guide, with a megaphone almost as big as her torso, guided us around the production facility. This particular factory retained a lot of its older structures, so entering the compound was like stepping back in time. We were first shown the museum, featuring life sized wax figures replicating the way miso was produced way back when. We then were shown the holding facility for miso being fermented. It takes a huge facility as mame-miso takes two years to make. The only things used are soy bean, salt, steam, and koji cultures to start the fermentation process. After the basic material is made, it is packed into HUGE barrels and stored for two years. No air conditioning or heating required, just ambient conditions. The barrels are approximately 180 centimeters in circumference and 180 centimeters in depth. Each barrel holds six tons of miso. I asked our guide what the street value of each barrel is, but she didn’t know. One remarkable thing I noticed was the use of organically grown soy beans. Many barrels and pallets were emblazoned with the word yuuki, meaning organic.
When the tour was over, we sampled miso soup made with soy bean + rice miso, then 100% soy bean miso. We then entered the souvenir store. Using the price which I paid for 400 grams of the mid grade mame-miso, I calculated the street value of one six-ton barrel to be 12900000 yen, or about 115K US dollars. Considering there were close to 500 barrels in the storage facility we were shown…WOW! 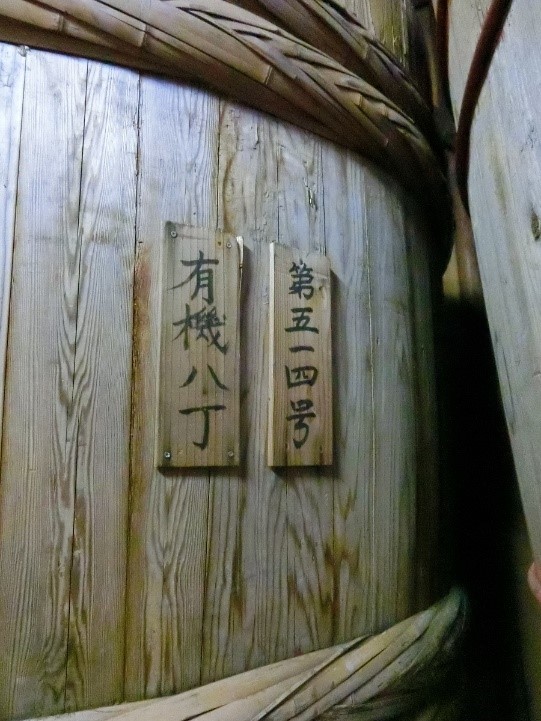