Right in the heart of Minato, Tokyo, lies the Zojoji Temple- the main temple of Jodo-shu Buddhism. This temple is absolutely enormous and has one of the best locations in Tokyo as the Tokyo Tower can be seen standing tall behind the temple.

Due to fires, earthquakes, wars, and natural aging, the only original portion of the Zojoji Temple that now remains is the Sangedatsumon Gate. The rest of the temple’s buildings are relatively recent reconstructions.

Walking around the Zojoji Temple, I could tell that the buildings were much newer than the Sangedatsumon Gate. The colors and the structure looked more modern than the aged gate. The whole property is very old in a sense, however the contrast is apparent.

Standing 21 meters tall, the Sangedatsumon Gate is a dramatic and incredible sight. The gate stands right on the edge of a major road, continuing the common theme of Japan’s merging of modern and historic. The name of the Sangedatsumon Gate can be broken down into the following meanings: san, meaning “three;” gedatsu, meaning “delivered from;” and mon, meaning “gate.” Altogether, the name means that walking through the gate will deliver you away from three earthly states of mind: greed, anger and stupidity.

When I approached the gate, I was standing on the other side of a busy road, cars rushing past this gigantic piece of history. It was a very odd experience looking up at this enormous, ancient structure and imagining what the world looked like when it was built. Now, in 2016, the gate still stands tall, and the modern city world has grown all around it, shoving itself up upon it. It feels like the Sangedatsumon Gate is a powerful force looking upon the city, reminding us where we came from.

The main hall (the Hondo) is called Daiden. It holds the large image of Amida Buddha as well as the images of Great Teacher Shan-Tao, whom perfected Jodo-kyo Buddhism, and Honen Shonin, whom founded Jodo-shu Buddhism based upon Shan-Tao’s Jodo-kyo.

When I entered the main hall, it felt like the noise of the world was suctioned out of the room. In a room as large as this, the echoes make it so that you can hear a pin drop. Therefore, everyone remains silent and lets the view soak it. The room is covered in gold and vermilion, and it made me forget where and what time period I was in.

The property also holds a lecture hall, called the Koshoden. This ceiling of this building is covered in gorgeous pictures of blooming flowers that were created and donated by 120 different Japanese artists.

Right next to the main hall is the Ankokuden. This building enshrines the Black Image of Amida Buddha. It is said that Tokugawa Ieyasu would deeply worship this image and it is the reason he won so many battles and was saved from danger on so many occasions. Therefore, it has ever since been believed that the Black Image of Amida Buddha brings victory and wards off evil.

The Zojoji property also holds the Daibonsho (big bell). The bell is 3.33 meters tall and 1.76 meters wide. The casting work for the bell was done seven times over before it was considered good enough. The bell is tolled twice during the day, six times in the morning and six times at night. This serves to purify 180 different earthly passions that lead people astray. This 15 ton bell is considered one of the “Big Three Bells of the Edo Period.”

As you pass through the Sangedatsumon Gate, you will see a large Himalayan Cedar tree. This tree was planted by General Ulysses S. Grant, the 18th President of the United States, whom visited the temple in 1879.

One of the lesser known qualities of the Zojoji Temple is the Unborn Children Garden. Within a garden in the cemetery is a collection of statues. There is row after row of statues resembling small children. The parents of unborn children (miscarried, aborted, and stillborn) are able to pick a statue and decorate it with children’s clothing and toys. A small gift is placed next to the statues as an offering to Jizo Bosatsu, the guardian of unborn children, asking him to make sure their child is taken to the afterlife. Because the children never had a chance to live, they were not given the opportunity to complete the good deeds required to enter the afterlife. Therefore, Jizo hides the children under his robes to protect them from demons as he takes them from this world to the afterlife. Sometimes stones are placed by the statues in an effort to ease the suffering during the children’s journey there. Jizo Bosatsu is also known as the guardian of all other children, expectant mothers, firemen, and travelers. Due to the taboo behind miscarriages, abortion, and stillborn children, this garden gives parents a place to carry out their grieving process and hopefully find some peace. This garden is very unique and makes Zojoji Temple more emotionally significant to many people.

Before visiting the Unborn Children Garden, I had expected it to be a relatively small collection of statues. I was shocked when I saw how many rows of statues there were. There were hundreds of statues, each with their own clothing and toys, and all of them holding pinwheels. When the wind blows, the pinwheels spin. You would imagine that the pinwheels spinning and the eroding statues staring at you would be a somewhat dark or eerie experience, as I had anticipated it to be. However, I instead felt an odd wave of joy and comfort. Standing there made me very sad for the parents, but very happy for the children. When the pinwheels spun, it made me feel like they were saying that they are okay now.

The experience of visiting a temple is significantly different than visiting a shrine. For those who want to experience the Buddhist religion, I believe that Zojoji Temple is the perfect place to gain that experience. 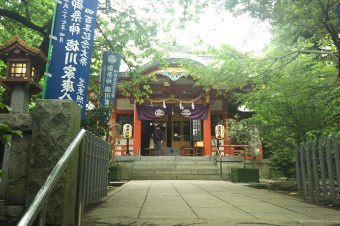