When entering Akasaka Hikawa Jinja Shrine. Akasaka district is how the trees seem to envelope you and take you away from the concrete jungle of urban Tokyo. At the entrance you will encounter the first large stone torii gate, flanked by stone statues called koma-inu, which demarcates the border between the city and the sacred grounds. The mossy stone-laden path leading from this torii to the main complex is canopied by large, beautiful trees which not only provide shade from the Tokyo summertime sun, but also drown out the sounds of cars and trains.

After climbing some short stairs you will enter the main courtyard, which houses the main building of the shrine along with an ablution station to wash your hands and mouth, some plagues describing the almost 300 year history of the complex, and hanging ema which are prayers written on wooden blocks. Here, you can ring the bell in front on the main building, deposit change into the box, and perform a small prayer to the shrine’s gods.

Lower down from the main courtyard is another, much smaller shrine, to the god inari. This ancient god is associated with rice cultivation and is represented by statues of kitsune, i.e. foxes; the thriving plants surrounding the shrine reflect inari’s role in the fertility of the land. Although small, there’s a certain beauty in the simplicity and its connectedness to nature of this inari shrine.

You can also receive, for a small price of 300 yen, a goshuin from the shrine. Goshuin are stamps accompanied by calligraphy written by one of the shrine’s attendants that document both time and place that you got them. The practice of receiving a goshuin from temples and shrines dates back hundreds of years, as people wanted to document their pilgrimages. The book that goshuin are placed in, called goshuinchō, can also be purchased at the site along with other talismans and amulets.

All in all, the small and quiet Akasaka Hikawa Jinja Shrine is an ideal place to reset one’s mind and body from the sometimes hectic and fast-paced nature of sightseeing in Tokyo. 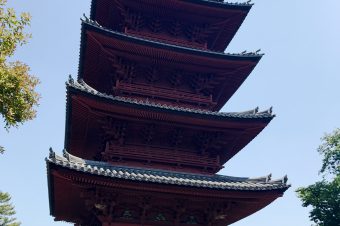