The following interview is between Kozo Yamamoto, an eight-time elected member of Japan’s House of Representatives, and Gabriel Wozniak, a journalist at JTAST. This interview took place at 14:00 on May 20, 2022. Some of the statements have been paraphrased in order to be more clear and concise.

WOZNIAK: Good afternoon, Kozo-san. I must say, it is both a pleasure and privilege to have the opportunity to interview someone with so many prestigious accolades. I would like to begin by asking what kind of pro-international tourism stances you took during your eight terms as a member of the House of Representatives.

KOZO: Well, for starters, I tried to take the lead to open up the Japanese market for inbound tourism. Right now Japan’s currency is decreasing and we are beginning to learn to live with COVID-19 by saying we have to open up our market again for inbound tourism. That’s one big factor in the Japanese economy, because the currency of yen is weak and many people are criticizing how low the yen is. Since oil prices are going up, which means our trade condition which is export price divided by import price will go down because oil prices are going up. At that time if we don’t have weaker yen, then the Japanese economy will be crushed down. The foreigners, however, will enjoy the weaker yen, and this will increase inbound tourism.

WOZNIAK: Despite your believes and the positive effects it would have in Japan to have more inbound tourism, would you say most Japanese are for inbound tourism?

KOZO: Well, as I mentioned, the foreigners will enjoy the weaker yen we have here. After three years of COVID-19, many people are very eager to go out because they have not been able to for so long. A lot of the people who travel abroad are very wealthy, and when they come here they spend a lot of money which boosts Japan’s economy. They will spend money on food and beverages, lodging and maybe even tourism activities like Disney. Japanese people are quite in favor of inbound tourism.

KOZO: Oh yes, because of COVID-19 we stopped at around 30 million, but if we open up further for inbound tourism, we will have a lot more people coming to visit Japan.

WOZNIAK: How would you go about reaching that goal?

KOZO: It really depends on the situation of COVID-19. We are living very rigidly right now, testing people when they come to the airport and requiring cell phone apps; we will probably have to play this out. By developing these vaccines, we are trying to make COVID-19 more like the common flu. Then it will be easier for foreigners to come in when we don’t have any restrictions at the airport; otherwise, we cannot recover the economy.

WOZNIAK: Do you believe any changes need to be made in order to mitigate the COVID-19 restrictions Japan has in place?

KOZO: Well, under the Japanese government we have done quite a lot to ease these restrictions, and open up Japan for inbound tourism. The Secretary General of the Cabinet, as well as Cabinet members such as the Minister of Transportation, the Minister of Justice and the Minister of Foreign Affairs are coming together in order to bring back inbound tourism. However, if you have any requests we would like to consider them [laughs].

WOZNIAK: Well, I would have to say getting tested 72 hours before my departure is a definitely bit of a time crunch. Maybe we could extend the amount of time to get tested, or get rid of it altogether?

KOZO: So you needed to get tested 72 hours before you came here, and then you got tested again once you arrived here.

WOZNIAK: Actually, I got tested in Canada before I started my 13 hour layover, THEN I got tested when I finally got here; I had a lot of things going up my nose.

WOZNIAK: How much do you believe the anime and manga industries have inspired people from other countries to come visit Japan?

KOZO: Very much, I have found many foreigners, not just Americans, but also Europeans and other Asians, have found interest in Japan through anime and manga, because it’s very easy to be touched by and to understand. So, that’s Japan’s biggest power of culture, things like Pokémon.

WOZNIAK: Really? Are you a fan of anime like me?

WOZNIAK: I guess it’s not for everyone [laughs]. So, what would you say is the most common motivation of people who wish to visit Japan recreationally?

KOZO: There are four main reasons why people come to Japan, the first is nature and scenery, the second one is food, the third is culture, and the fourth one is communications. One thing we need more of is “omotenashi.”

KOZO: Yes, omotenashi, it means hospitality in Japanese. America’s form of hospitality is amazing, and I think we should introduce it into Japan; otherwise, we cannot continue to exponentially increase the rate of tourism we had before COVID-19. In Japanese hotels, if you come to a hotel into the morning and the check-in time is at 3 o’clock, no one takes care of you [laughs]. It is most unfortunate.

WOZNIAK: That is indeed most unfortunate. Now, in your 2016 interview with JTAST you mentioned younger generations are leaving the traditional behavior of going to shrines and temples. Are you concerned temples and shrines may one day be a thing of the past?

KOZO: Generally, people in Japan who have grown up in small, local villages tend to want to go to the big cities, like Tokyo or Osaka. Once they start to work there, they do not want to go back to their birthplaces. So gradually, the people who support the temples and shrines are decreasing; it is a national crisis. So to defend this, we need to increase the inbound tourism in order for them to receive entrance fees from foreigners. Many shines and temples are very traditional, and we want to try to keep our history intact. Once you get to know the history of a shrine or temple, it becomes much more interesting. We need to put more effort into educating people.

WOZNIAK: Oh, do shrines require money to operate, or are they subsidized by the government?

KOZO: The government of Japan prohibits giving money to any religious institutions; they must earn the money themselves. Usually many shrines and temples have supporters who keep them open. However, if the shrine is some sort of national treasure, then the government can give money out to it, but it’s not a lot, not enough.

WOZNIAK: Has a shrine or temple ever been intentionally, yet lawfully destroyed, maybe to make room for a parking lot or an office building?

KOZO: Well, if it was parking lot or a building, it would have to pay taxes, but some shrines are demolished in order to be rebuilt with the same dimensions, sometimes at an alternate site.

WOZNIAK: Is it beneficial for Japan to have Americans, such as me, working here in the hospitality and tourism industry? Do we bring any negative culture into your country?

KOZO: No, not at all, you are very good company, and very good for the hospitality industry in Japan. When I was in America, I stayed at a hotel one time and a boy helped me to my room. When we got there he asked me, “Mr. Yamamoto, is this your first stay?” I told him, “No, this is my second visit.” I went out to dinner that night and when I returned, the boy said to me, “Thank you very much for coming back again, and we appreciate you staying with us. If there is anything we can do to make your stay more comfortable, please don’t hesitate to ask me.” This is a very nice thing to hear, and I would be happy to return a third time; this is what I believe hospitality is all about.

WOZNIAK: I guess even as a hospitality management student, I have taken America’s “omotenashi” for granted, but I am very glad to hear you had such a positive experience with a member of our industry. Unfortunately, I am getting the cue we are out of time. Thank you so much for taking the time to sit down and chat with me, it has been a pleasure meeting you.

KOZO: Likewise Gabriel, please let me know if you ever have any more questions! 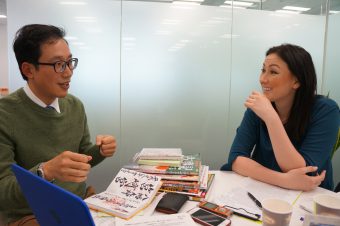 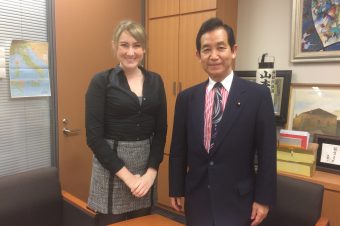