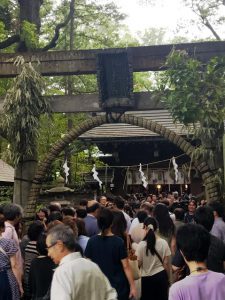 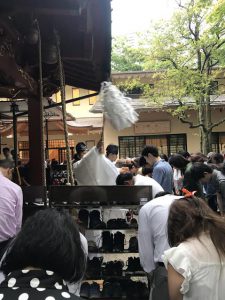 Twice a year on the last day of June and December, Shinto shrines participate in a ceremony called Oharae. During the Oharae, the Torii pathway leading to the shrine is transformed with hundreds of people attending this ritual. The Torii gateways are a distinctive symbol of Shinto and represent a gateway between heaven and earth. One of the things people associate Oharae with is the chinowa.

The chinowa is a large ring-shaped object made of cogon grass. It is placed vertically on the path leading to the Shinto shrine. Anyone who visits the temple are Oharae will pass through the chinowa. It is believed that this act purifies the person from all the bad things one committed in the past, plus the bad luck one has been suffering. The act is known as the “chinowa kuguri”.

Once you pass through the oharae ritual can begin. Oharae always starts at the shrine’s main worship hall. It begins with traditional Oharae prayers and purification. Next, the priests walk through the chinowa, and during this purification ritual, the Shinto priests toss kirinusa (small cut pieces of sacred rope and cloth) onto all the worshippers in the main hall. Some priests then run out of the hall and through the crowd lining the pathway, tossing kirinusa on them. Next, the priests carry crates of paper dolls three times through the chinowa in a figure eight pattern. Those attending the oharae pass then through the chinowa. The older generations go through first, while the younger generation waits. This gentle, respectful procession reflects the knowledge and respect of all the participants.  Although passing through the chinowa may look confusing, it is executed smoothly and is an amazing experience to watch.

For people that are unable to attend the ceremony, the shrines will provide Hitogata (paper dolls) to which one transfers one’s sins and impurity. This is done by writing your name and age on the paper doll, and then rubbing the paper doll on your body. Lastly, you breathe on the paper doll, and depending on the shrine, you either put in the crate that the priests will carry, or if the shrine has a pond or river, you can float the doll on the river to purify it.  These paper dolls are symbolic of a person’s tsumi and have been purified at the shrine before they are carried by the Shinto priest through the chinowa.