The world has been taken by storm by one of Japan’s most famous franchises, Pokemon. In several countries all over the planet, people of all ages are running around with their smartphones open attempting to catch wild Pokemon on their new favorite app, Pokemon Go. This app uses real-world GPS systems and has a map of the entire planet so you can play anywhere you please. However, not everyone is okay with that message.

There have been many obvious issues with telling the public that they can play a virtual reality game anywhere in reality that they go. For starters, many people try to play the game while driving, which is obviously dangerous. Beyond reckless driving, many people have been very disgruntled about the locations that players go to in order to catch Pokemon.

In America, many churches and cemeteries have had to ban players from entering their property. Many people are finding it very offensive that kids are running around playing video games in holy places and burial grounds. This is a similar issue in Japan, where players have been seen running around the grounds of temples and shrines.

The Izumo Grand Shrine, an extremely famous shrine in Japan, has banned Pokemon Go from its premises. It is likely that many other shrines and temples will follow suit. Shrines and temples are sacred places filled with delicate artifacts and rich history, and therefore should be respected.

Some shrines are a bit more relaxed about the idea and simply ask that if you do play the game, please do so respectfully. The Miyazaki Shrine in Hiroshima City posted a message to their visitors regarding this issue. Here is the message translated:

“To all Pokémon trainers,

The Pokémon in and around the temple are paying their respects.

Please don’t disturb the Pokémon while they are praying, OK?

Let’s all pay our respects too, and greet the gods. Once you’re done with that, have fun catching Pokémon!

Please mind your manners, and play Pokémon Go in a way that doesn’t disturb people attending the temple.

Please don’t enter the temple buildings, or go inside the stone barriers. Even if you see a Pokémon inside there, those may not be wild Pokémon, but servants of the gods. Don’t try to approach them – instead wait for them to come out.

While in the woods, watch your step and be aware of your surroundings. There may not only be Pokémon, but rhinoceros beetles, stag beetles, and wild tanuki [raccoon dogs].

Also, if you see any rare Pokémon, please tell the shrine priest as well, OK?”

In conclusion, if you are planning on visiting a temple or shrine while in Japan, please be aware of that location’s rules. It can be very rude to other guests if you are stumbling around with your face buried in a phone. It is also very disrespectful to anyone buried at the property and any deities that are enshrined there. Please try to follow general shrine/temple manners and make your visit a respectful one. Once you’re back outside the property, happy Pokemon hunting! We hope you “catch ‘em all!” 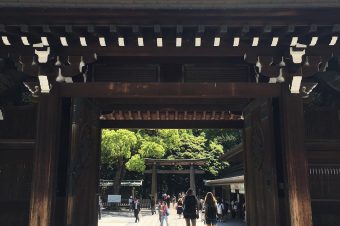 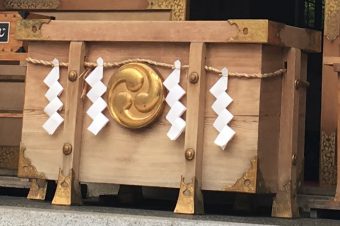 When visiting a temple or shrine, you may notice a wooden box in front of... Read More