While I was in Kochi Prefecture, I stopped in the town of Ino to check out their locally popular paper museum. They even have a paper making experience where one can try their hand at making traditional washi (paper that uses local fiber, processed by hand and made in the traditional manner), and they can even take home what they make.

I chose the ticket option which included the papermaking, because it was fairly inexpensive, and how often does one come across the opportunity to make traditional Japanese paper? Not very often I suppose.

First we began by setting a frame on a mesh board which we will dip in the fiber-filled water. Then we begin sifting the water through the mesh, leaving only fibers which will form paper. We let the excess water drip back into the fiber tank by tilting our mesh board upwards.

From this point we firmly press down on the fiber squares to squeeze out as much water as possible and flatten the paper down. You must press down quite hard; be sure to use all your weight on it.

Now you let the paper dry for about 30 minutes. Making paper takes time, and you have to be sure to give it the necessary privacy in order to form correctly. So, in the meantime you may tour around their museum which is themed around Japanese papermaking tradition.

Some photos of the beginning of the museum tour where they show models of traditional washi culture. The one picture shows a lady trimming the wood into thin fragments and preparing them to put on the cart in the next picture. The product on the cart will be taken to make into washi.

As you can see in this photo, there are many objects which can be made from paper, like clothes, hats, fans, paper-mache and more!

The Japanese have evolved their art of papermaking over the years. At a certain point they used machinery to create their paper, making it less handmade and more streamline. This is not necessarily a bad thing, the paper quality improved, the amount of labor decreased, and moreover, the price of paper became more affordable.

Here is a photo of a bunch of tools used to make papers in the days of old. There is also a cauldron used to cook the now materials by alkali chemicals and boiling water.

After thirty minutes of waiting, as promised, the paper was ready, and was presented to me in a nice envelope. 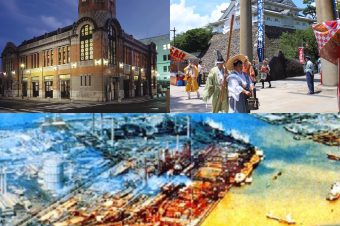 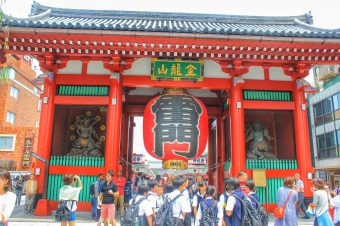 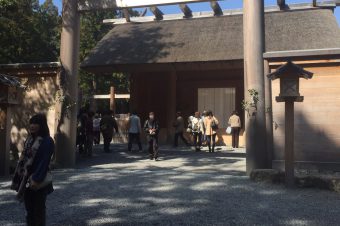 The construction of Kochi Castle began over 400 years ago in 1601. The castle is... Read More