Hand copying sutra is called “Shakyo” in Japanese. Sutra copying is the East Asian practice of hand-copying Buddhist sutras. You can accumulate merits by this act of word-for-word sutra transcription. Other meritorious practices included the memorization and recitation of sutras. The effort of sutra copying is considered an expression of piety, and recognized as a devotional practice, since it comprises of worship, literature, and calligraphy. Since early history, it was also common for people to sponsor monks and nuns to recite or copy sutras, thus indirectly cultivating merit in one’s ancestors, family, and oneself by transference.

You can try the method of Shakyo at some Japanese Buddhist temples. The purpose of copying sutra used to be to show deep devotion to Buddhism, however, nowadays it emphasizes on the meaning of purifying oneself, both mentally and physically. We now describe the meaning of Shakyo as a way of purifying and training oneself. This experience is truly great for foreigners because they are only able to try Shakyo in Japan. Foreigners may feel that it is difficult to copy sutra because Japanese letters are so drastically different from English, but they will be instructed by a monk on how to do it properly. With this expert assistance, the task becomes far easier. We definitely recommend trying out this unique experience! 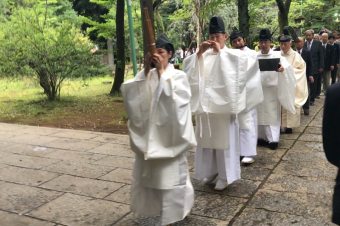